With their delicate flowers and dill-like foliage, cosmos are much tougher than they look. They are a must for anyone dreaming of having endless home-grown cut flowers this summer!

Seeing cosmos grow from seed to gigantic plants full of flowers in shades of white, pink or yellow is almost magical. Even the lower varieties show great strength in the form of sustained flowering – no wonder bees and butterflies love them!

When should I sow the seeds?

Cosmos can be direct sown in the ground once the soil has warmed up – in May in most places. If you are able to, it is a good idea to sow cosmos indoors and plant them out as soon as the risk of frost has passed. In this way they will be ready to flower in May. Even if you happen to be a little late, you still have a good chance of getting flowers. This is because cosmos continue to flower until the first frost. 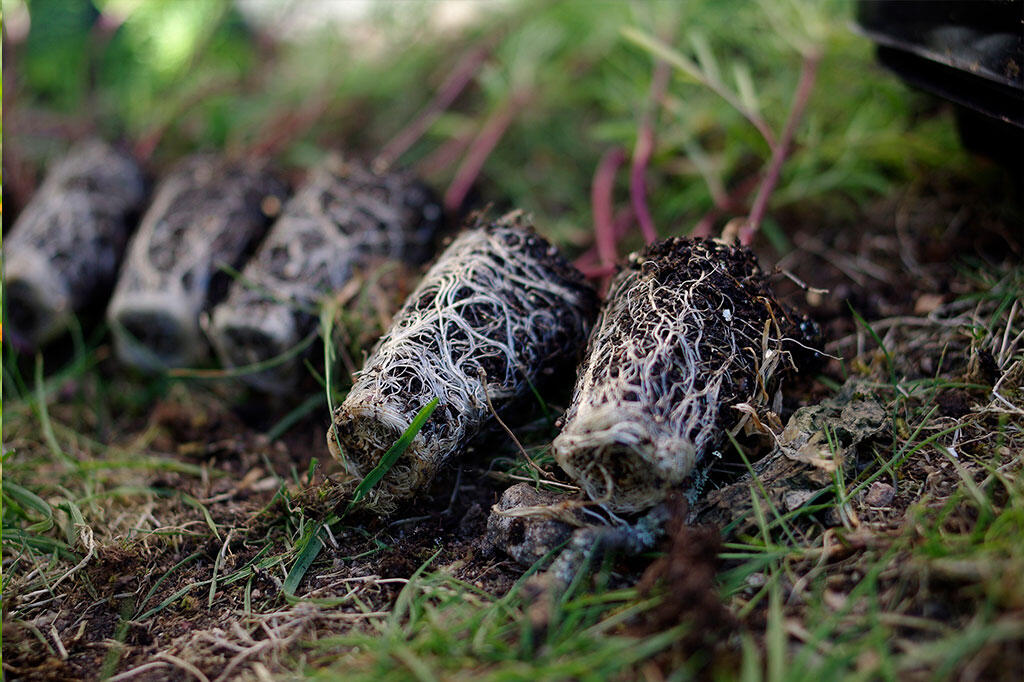 How do I sow the seeds?

The seeds just need to be covered with a thin layer of soil (a few centimetres maximum). If you choose to start seeds indoors, it is best to sow the seeds in some kind of plug flat. That way you have nice plug plants to plant out when the frost risk is over! Leave the seeds in a warm spot if possible, such as on a heat pad or over a radiator so they will germinate more quickly. Place the plants in a cooler area once they have germinated.

Which soil type is best?

Cosmos thrive in humus-rich, sandy soil without a lot of nutrients.

Which location is best?

Cosmos can be grown either outdoors or in large pots. Height can vary from 30 cm to 150 cm, read the seed packet to see which variety to choose. Cosmos do best in a sunny spot.

Why aren’t my cosmos flowering?

Cosmos is one of those plants that can have too many nutrients – at least too many to flower. This makes the plants produce lots of leaves and not bother to produce flowers.

Cosmos are also plants that flower when the days get shorter. In June, when the days are lightest, it never gets dark enough for long enough so flowering only starts when the nights get longer. If you get the plants started early, they will flower all summer long, but be at their best and most beautiful towards the end of the summer. The light sensitivity levels of cosmos can vary between varieties. 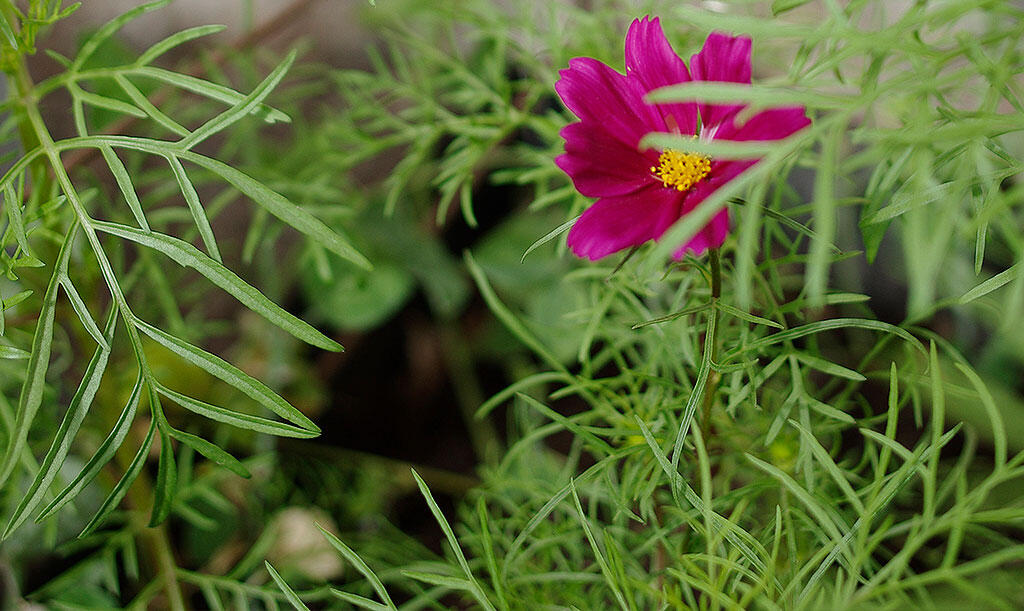 How long will they flower?

Remove wilted flowers and be generous with cosmos in bouquets – the more you pick, the more they flower! Cosmos are not very sensitive to cold and flowers until the first frost, and sometimes survives it too.

Which nutrients should I give?

Cosmos don't need a lot of nutrients, but make sure the soil is well fertilised and give it a little extra food from time to time during the summer. Read more about nutrients here. 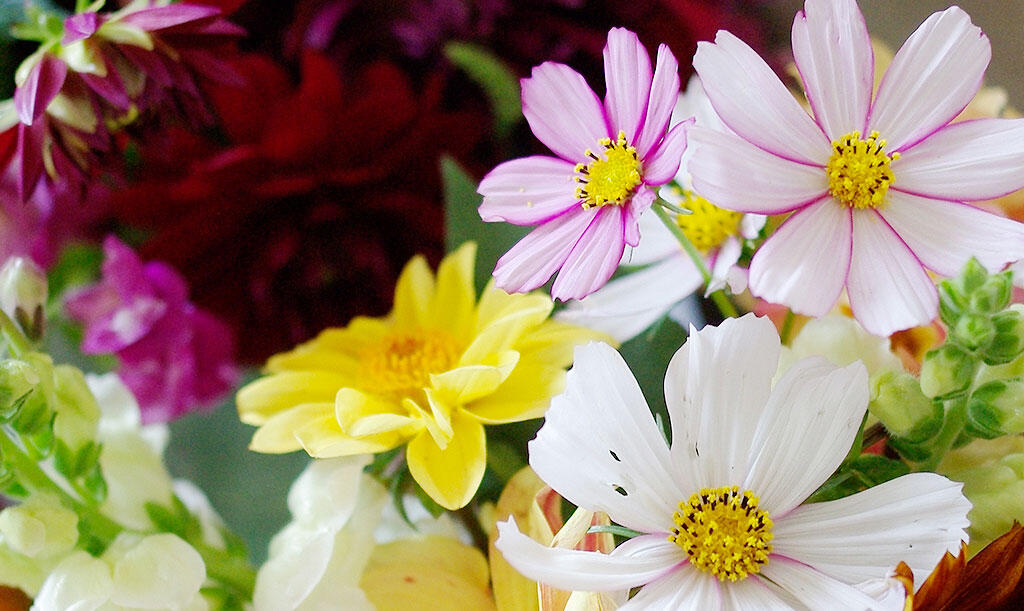 Should I prune the top?

You don't need to prune the top of the plant to get a nice, full plant. However, pruning does not harm the plant either and may cause it to branch out more.

Can the plants overwinter?

Cosmos are annual plants, but they will sometimes self-seed if you leave the flowers alone to form seeds.

Tips on different varieties of  cosmos 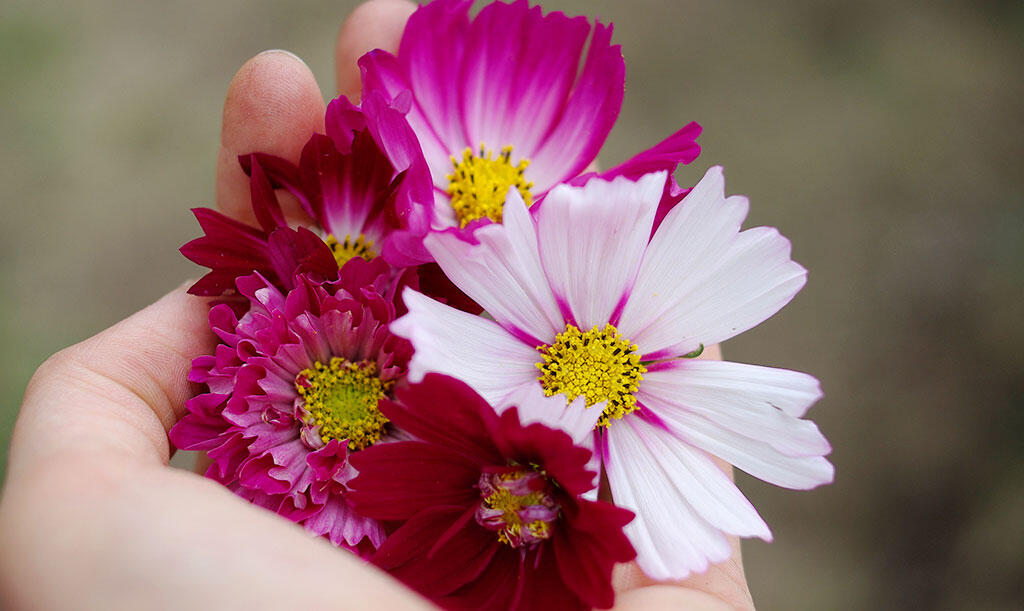 ‘Double Click’ has single-coloured, ruffled flowers in various shades of pink or white. The plant grows really tall – up to 120 cm.

‘Gazebo Red’ is a lower variety of cosmos that blooms with cherry-red flowers.

‘Daydream’ has white flowers with a touch of pink at the base of the petals. The plant usually reaches 100–120 cm tall.

‘Candy Stripe’ has white flowers with cherry-red edges that can fill more or less of the petal. The plant grows to around 75 cm tall. 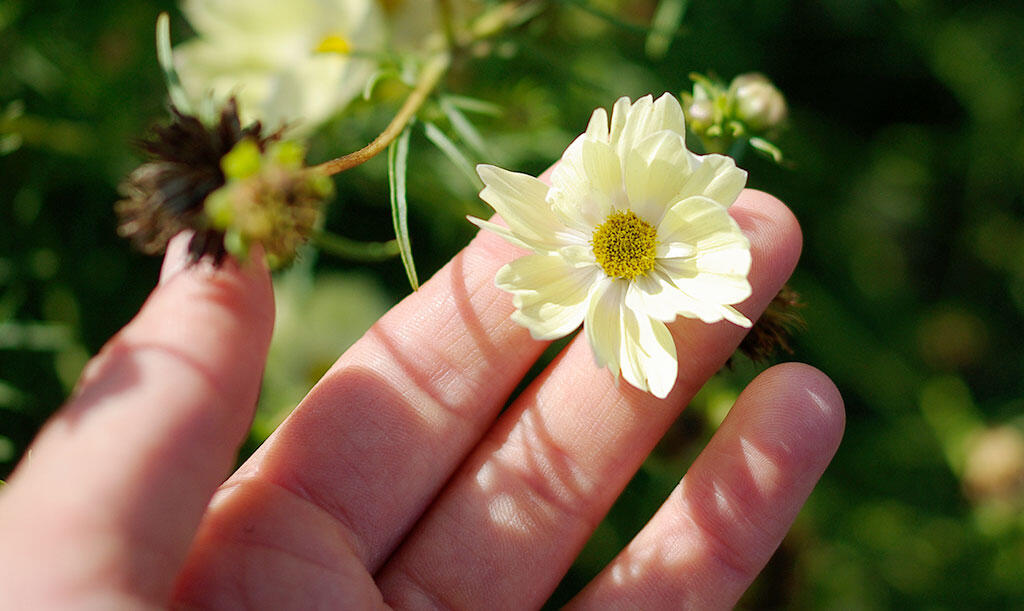 ‘Xanthos’ is one of the smallest, both in terms of the flower and the height, as it only grows to about half a metre tall. 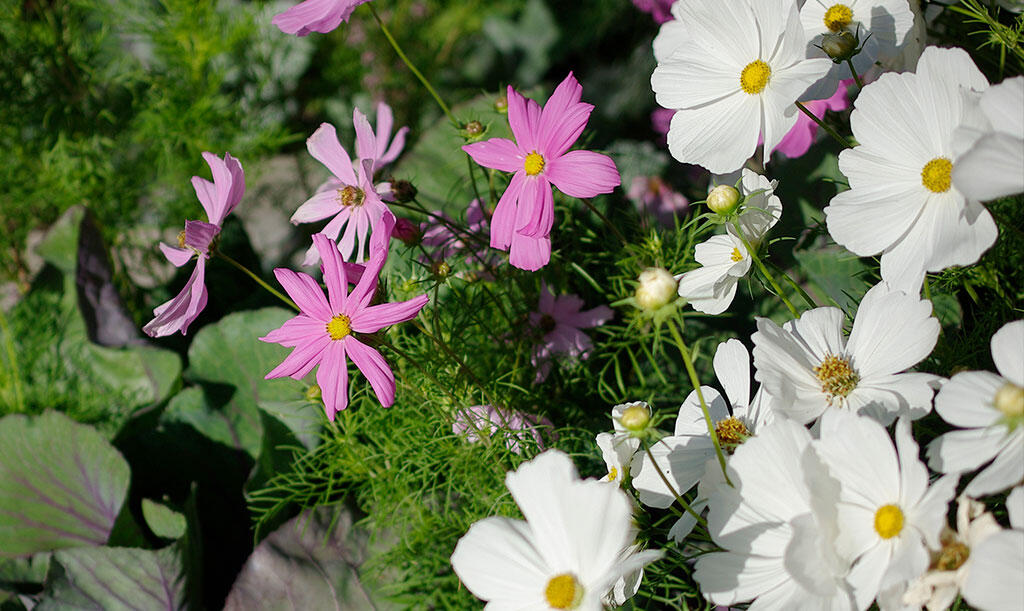